My Trip to Forgotten Communities in Bangladesh, March 3-10, 2020

Travel to Bangladesh with OBAT Helpers

CEO of OBAT Helpers, Anwar Khan invited me to visit Bangladesh to see firsthand work being done by his organization in ‘Forgotten Community’ (Urdu-Speakers) camps across the country. These are people who requested to be evacuated to Pakistan in 1971 when Bangladesh achieved independence and separation from West Pakistan but were not accepted by Pakistan. Independence of Bangladesh came at the end of a painful and bloody civil war in which over a million people are said to have lost their lives, and widescale atrocities were committed against civilian populations by all sides.

The Indian sub-continent was under direct British rule for about 90 years ending in 1947 when the country won independence and was divided into Muslim majority Pakistan and the remaining being India. Pakistan consisted of two parts – East and West Pakistan with a thousand miles (1500 km) of Indian territory separating them. In the first 25 years of Pakistani independence there was largescale migration of Indian Muslims into the newly independent Pakistan. Most of the people migrating from India to East Pakistan were from states of Bihar, Orissa, UP and West Bengal.

In 1971 a movement for the separation of East Pakistan developed and with intervention from Indian forces East Pakistan became the independent country of Bangladesh in December 1971. During the war most of the immigrants from India living in East Pakistan stood with Pakistan army and were considered as traitors by locals. Red Cross established 116 camps in different cities of Bangladesh to provide shelter and security to these people. Initially it was expected that these people (often known as ‘Biharis’ or ‘stranded Pakistanis’) would migrate to Pakistan. Some of them were able to do so but the process was never completed. Those unfortunate people who were left behind continue to languish in temporary slum like camps, where they have been living lives of misery and quiet desperation for the past 49 years.

As chances of being accepted into Pakistan receded, Bangladesh government has helped to assimilate them into the Bangladeshi society. They have been granted Bangladeshi residence rights and ID cards as well as the right to vote. However, obtaining Bangladesh passports remains a challenge for them.

At the time of Bangladeshi independence there were about half million residents of East Pakistan who had sought evacuation to West Pakistan. Through migration and attrition, their number now is just over 300,000. They continue to live in makeshift camps that can rightly be called ghettos. They do not have support from the United Nations or other international refugee agencies since they do not meet the legal definition of ‘refugee’. They had become homeless without crossing an international border.

Camps comprise of a large number of one-room homes, packed tightly together. Each housing a family of approximately 3 to 8 family members; often spanning three generations. The first two generations of these ‘Urdu Speakers’ missed opportunities to assimilate in the local Bangladesh population, hoping instead to be repatriated to Pakistan. Only in the last decade or so an erstwhile process of assimilation into Bangladesh has begun assisted by the Bangladesh government and a few nonprofit organizations. Most people in camps, and particularly the younger generation are now fluent Bengali speakers.

Mr. Anwar Khan started to visit these camps in 2004 and subsequently established OBAT Helpers, registered in the US with IRS as a 501(c)3 nonprofit. OBAT Helpers started to convince the camp dwellers of the need to assimilate in Bangladeshi society and to start to educate their children so they may have a future in the country. They had to be convinced that almost 50 years after the calamity that befell them, there is no hope of them being repatriated to Pakistan.

I was attracted to the work of OBAT Helpers because of their focus on enabling and empowering these camp dwellers so their children may have a better future.

Back in 2004 these camps were lacking the most basic facilities – toilet, water, and sanitation. OBAT built communal toilets in the camps and set up tube wells for potable water. And today, OBAT is operating 50 educational projects for the camp residents including schools, tutoring and vocational training.

OBAT Think Tank: In December 2012 students with help from OBAT staff, formed what they called OBAT Think Tank. Their goal is to utilize the vast and untapped potential that is present in the youth of the camps in positive community building activities. It is an organized group led by the youth of the camps and works hand in hand with the OBAT staff.  The group aims to keep its members focused on the betterment of youth, while simultaneously improving their leadership and communication skills. They have conducted several projects that helped spread awareness on matters related to community health, safety and clean environment.

I spent four days in Dhaka and two days in Chittagong between March 3-10, 2020. I visited more than a dozen schools and several vocational training facilities being run and supported by OBAT. I also visited half a dozen camps in Dhaka and Chittagong. Each of these camps have a population of several thousand. Among them ‘Geneva Camp’ in Dhaka being the largest with over 30,000 inhabitants.

Today with efforts of OBAT and other similar organizations many thousands of children are getting educated, and many are even enrolled in programs beyond high school. I met boys and girls who were enrolled in polytechnic institutes and universities.  OBAT offers scholarship and stipends to 1,100 such children who are receiving higher education in technical fields such as textile engineering, fashion design, accounting, agricultural sciences, etc.

All camp dwellers have been able to get Bangladesh residency and the right to vote. This has helped them get attention and support from local elected officials. However, in order to get full citizenship rights, they must have a proper address for which camp locations do not qualify. They are free to move out of the camps and thus acquire a “proper address”. However, for vast majority of camp dwellers affordability of even a small rental apartment is difficult. Hence, it is clear only with education the younger generation can find a way out. I met young people from camps who got educated, got a job and were able to move themselves and their families out of camps. But there were many, many more who are unable to move out due to lack of financial resources.

My visits to OBAT Helpers schools were most impressive. Students were disciplined and eager to learn. Teachers came across as very dedicated. Most teachers themselves were residents of camps. Due to lack of physical resources most schools run multiple shifts. Some were holding more than one class in the same room. Class sizes were generally very manageable with 15-30 students. Yet one got the sense that education was being faithfully imparted. Schools were always neat and clean, and students well dressed in tidy uniforms, often provided by OBAT.

Both in Dhaka and Chittagong at the conclusion of my visit, student members of OBAT Think Tank put on a touching performance for me – giving speeches, reading poetry and performing skits and dances. I will carry these memories for a long time.

OBAT Helper’s focus on education is the key to breaking this cycle of poverty. As mentioned earlier OBAT is also focusing on infrastructure for camps — which comprises of building communal toilets (none of the camp homes have toilets) and boring tube wells inside camps for supply of potable water. I saw many of these ‘water points’ and how much of a difference they’re making in the everyday lives of these ‘forgotten people’.

Health care also continues to be a big concern. OBAT organizes health camps from time to time to help provide critical health care. I will never forget a conversation I had with an elderly lady in a camp. I had been invited into the one-room home where she lived with her children and grandchildren. I asked her how she was doing. “Not well” she responded. “I have very poor eyesight and when I sit down to eat, cats snatch my food,” she continued. “That’s why I didn’t send my granddaughter to school today so she could stand guard as I ate my meal”.

Hope for the future

In spite of all this, I came away with a great feeling of hope. These people are no longer waiting to be rescued by Pakistan. With help from organizations like OBAT Helpers the children are getting educated. And, all of them are fluent Bengali speakers, which is their first language. This is also the first step in getting out of camp life and getting assimilated.

I personally visited with hundreds of students in dozens of schools. They were all neat and tidy and had smiles on their faces that warmed my heart. When I visited many of their homes in camps it was hard to believe these smiling children and youngsters are coming from homes with so little. These children and their teachers, many of them from among the camp dwellers themselves, gave me hope and encouragement. Most of all their attitude and progress confirmed for me the value of the work OBAT Helpers is doing.

What you can do

Please visit OBAT Helpers website to find out more about their work (www.obathelpers.org). I hope like myself, you will find them to be worthy of your support.

Photos from my trip to Bangladesh with OBAT Helpers 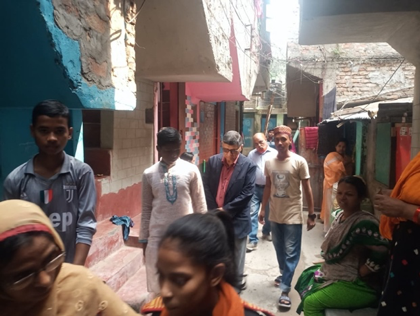 Walking through a camp in Dhaka. 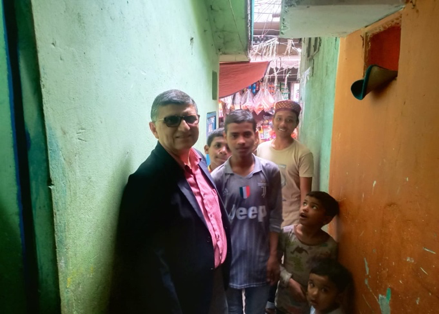 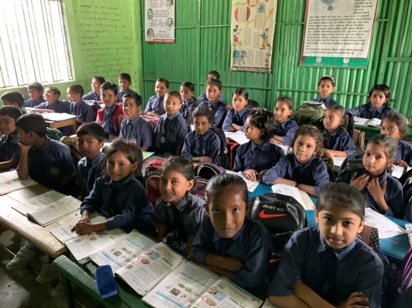 A Classroom in OBAT school. 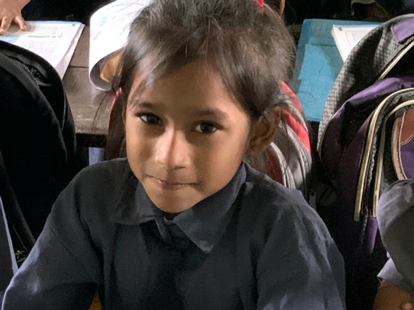 A student in OBAT school 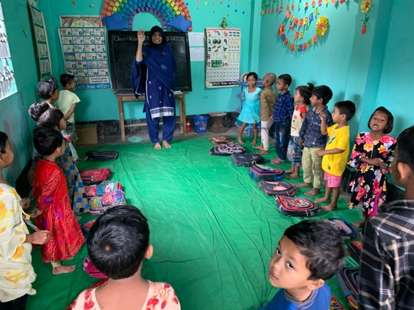 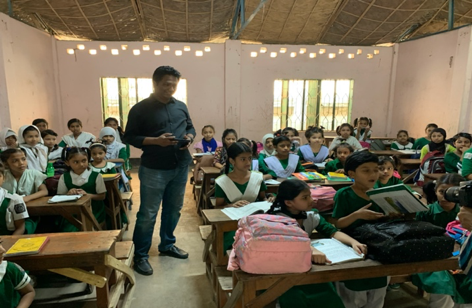 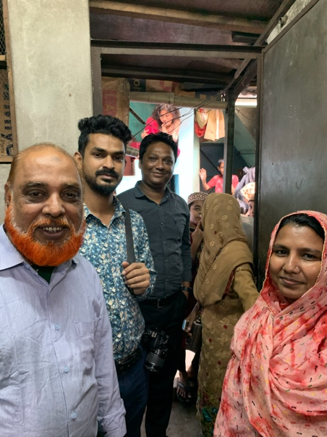 Walking through Geneva Camp in Dhaka. 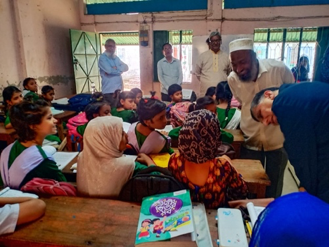 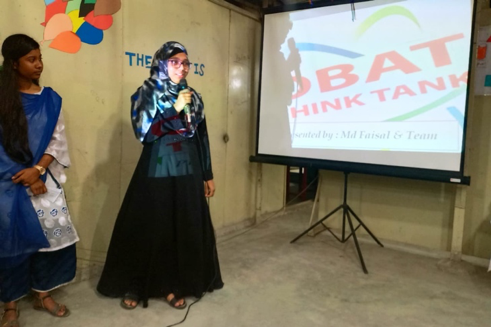 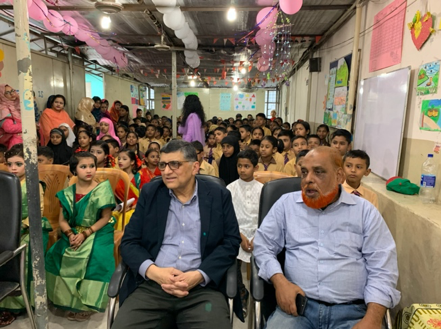 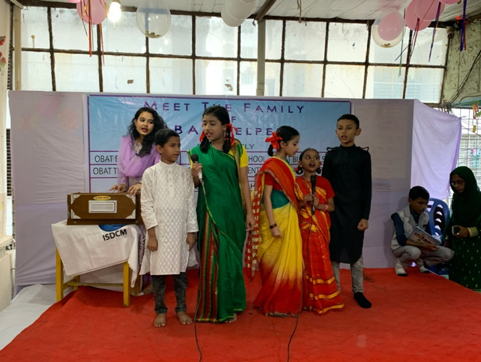 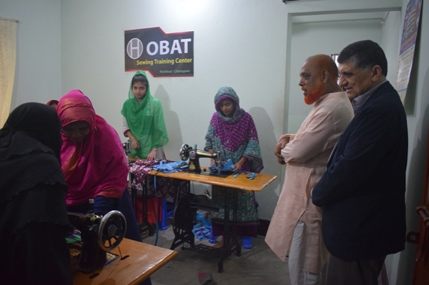 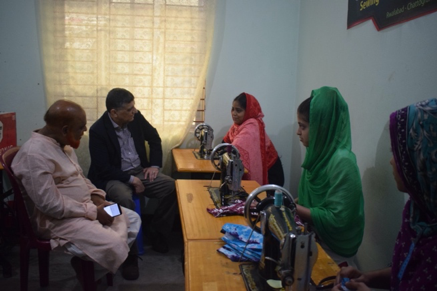 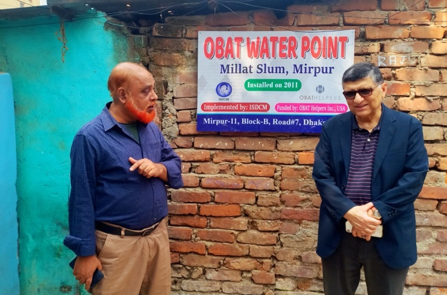 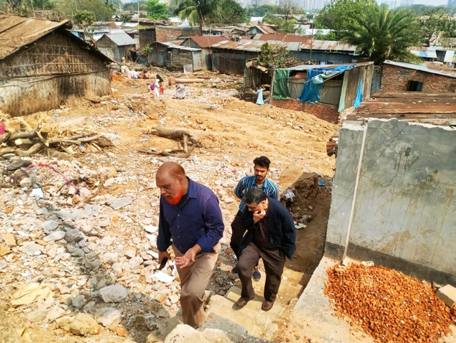 One of last remaining camps in ‘shanties’, Chittagong 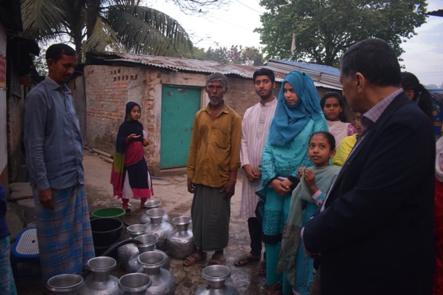 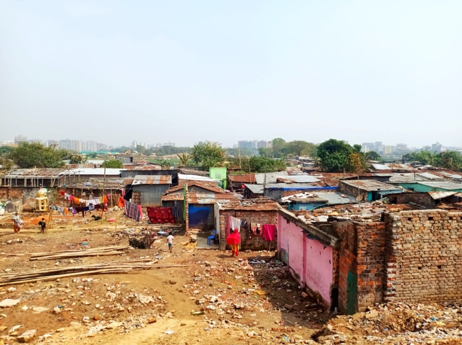 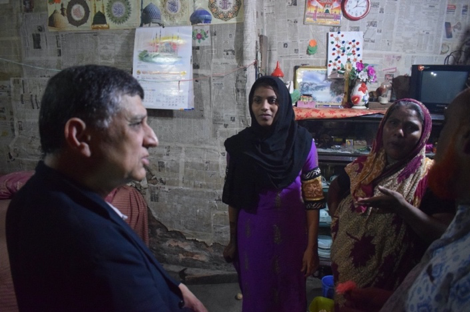 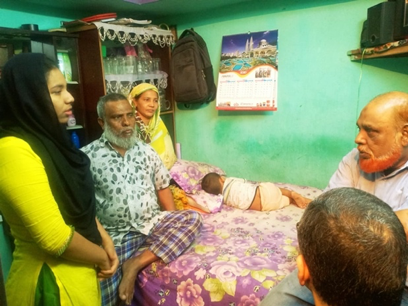 With a camp family in their one-room home. 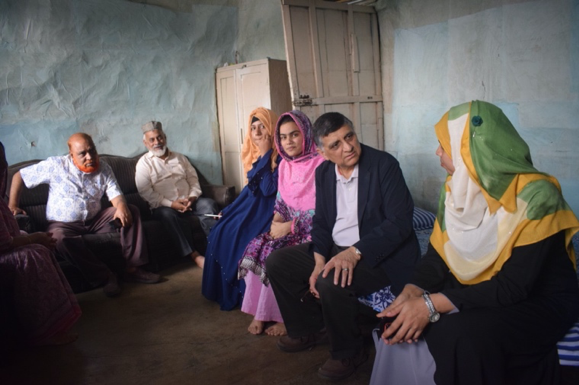 With a camp family 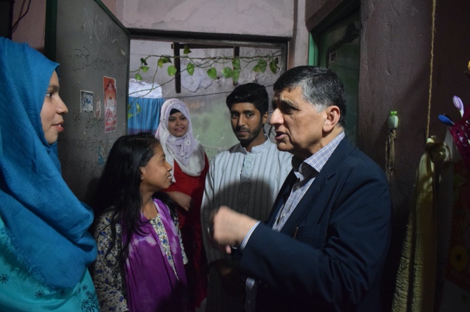 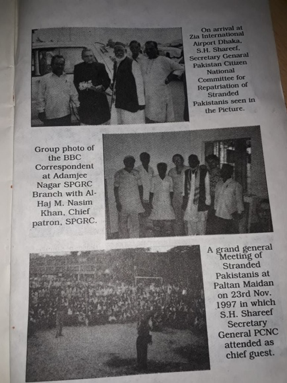 I was reminded of work by my Father S. Hasan Shareef, and my uncle Dr. Hasnain Shareef on behalf of this forgotten community 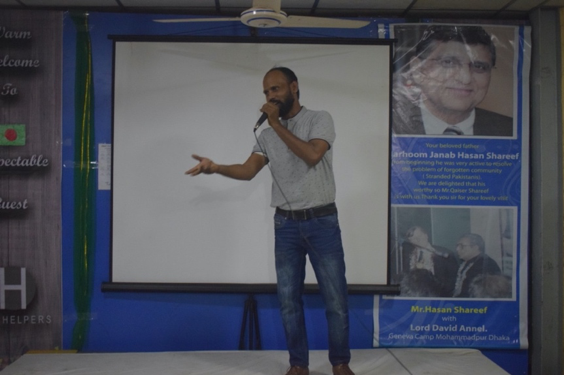 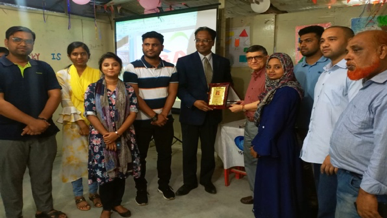 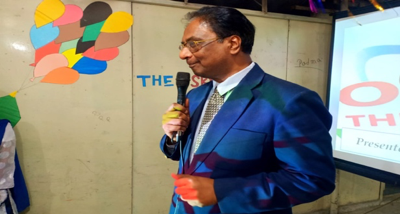 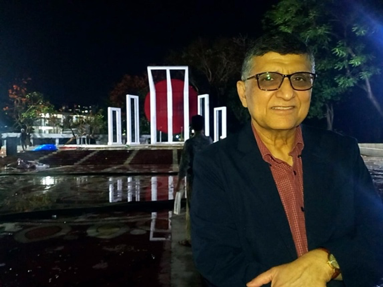 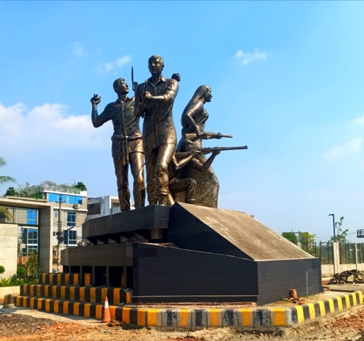 A recently erected memorial in Dhaka, to independence freedom fighters

My latest at Blue Ear Books

http://blueearbooks.com/real-news-fake-news-manipulated-news/
by Qaisar Shareef | May 22, 2017